Former England goalkeeper Paul Robinson has taken aim at the agent of Miguel Almiron after it emerged that the Paraguay international is considering his future at St James’ Park.

Almiron has endured a frustrating start to the campaign, having been regularly benched by Steve Bruce and only making four Premier League starts so far. The 26-year-old was a regular last season, registering four goals and two assists (Sofascore), but a switch to a more defensive five-at-the-back setup has seen him make way for more pragmatic options.

That has led to comments from Almiron’s agent, who suggested that the Paraguayan is considering his future and could have already left St James’ Park for Atletico Madrid were it not for the financial implications of the global pandemic, as per Roberto Rojas. It also emerged that the 26-year-old is attracting the attention of a few of the Premier League’s bigger clubs.

Speaking to Football Insider, Robinson took a swipe at Almiron’s agent and suggested that comments about his situation will have made things difficult for his client in terms of his chances of getting back in the team. He also doubted the likelihood of the Paraguayan getting a move to a perceived ‘bigger’ club. The 41-year-old said:

If my agent said something like that he would not be my agent any longer. I would get rid of him. You do not need that as a player. Almiron is at Newcastle and trying to get into that team to play week in, week out.

You do not disrespect a football club even if you do not want to be there. You may have clubs interested in you but there is ways and means of conducting your business. The agent did not cover himself or the player in glory.

He wants to concentrate on his football, get in the team and let his football do the talking. The agent is just trying to create some kind of story around his player to get a move in January.

Almiron might understandably be concerned over his lack of minutes so far this season, with the attacker perhaps viewing himself as one of Newcastle’s most talented players. However, the 26-year-old has struggled to deliver consistent end product in his time with the Magpies.

He missed nine big chances last season and lost possession on average 10.7 times per game (Sofascore), that is something which Bruce may have noticed and duly decided to put him on the bench as he looks for a more risk-averse style of play. Almiron might desire a move to somewhere better suited to his qualities but, as Robinson said, the way it is has come about might not help his cause.

It will be interesting to see whether any major European club makes a concrete offer for Almiron in January, but that would be somewhat unexpected given his struggle for game-time with the Magpies. The 26-year-old’s immediate focus needs to be on rediscovering his form and forcing his way back into the starting line-up for Newcastle.

Do you think Miguel Almiron has a future at Newcastle? 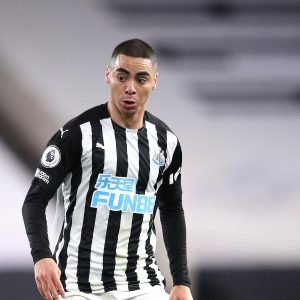 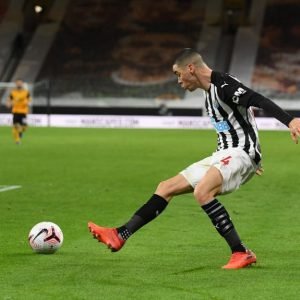